this taxon, other names (0)

other taxa, this taxon proposed (18)

Hohenbuehelia petaloides was rightfully named after an Austrian mycologist/botinist/statesmen, Ludwig Samuel Joseph David Alexander von Hohenbühel Heufler (1817-1885). Due to the fan-like appearance of this species, it is more droningly known as the Leaf-like Oyster.
H. petaloides is a wood decay fungi and obtains nitrogen by catching nematodes with its sticky hyphae. The nematode violently lashes about as a fly would if trapped in spider web. The quick movements only brings the doomed nematode closer to its death. 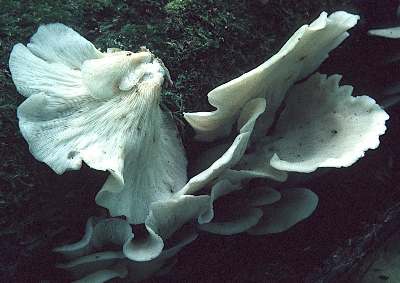