We’re looking for feedback on how to improve Mushroom Observer, more information here.
We have started work on some changes to the MO naming system. See this Google doc for more details and feel free to leave comments.
Please remember to donate to support Mushroom Observer. We are entirely volunteer run, but we still need to pay for our servers. Thanks!
Public Description of Ganoderma applanatum (Pers.) Pat.
Description status: Unreviewed

G. applanatum is known as a conk, which is a general term for a fungus that destroys wood. It is a called a white rot fungus due to its ability to digest the brown lignin in a tree as food source and leave behind the white cellulose.

G. applanatum, appropriately dubbed a shelf fungus due to the shape, is a fan-shaped polypore that can range from 30-70 cm long, making it very noticeable in the woods. It has a thick, hard, lumpy, brown top with several radiating zones. The spore surface is ochre in color, unless scratched off in which case the spore surface becomes brown. The pores of the spore surface are tiny and regular in shape.

Its common name is the artist’s conk because of the pictures one can draw when the white pore surface is scratched to reveal a brown color. 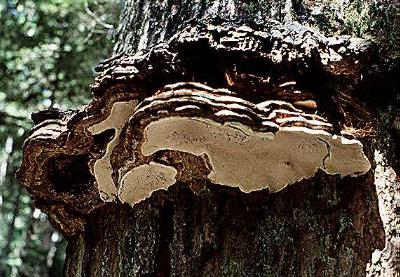 G. applanatum (above) has thick, double-walled brown spores that range from 6-9 X 4-7 micrometers. Often times, the pore surface cracks and sheds thousands of the brown spores, which can often blow onto the top of the pileus in large numbers. The pore surface is white and rubs off easily, leaving the brown hyphae exposed below the scratch.

Ganoderma species are different from other shelf fungi in that Ganoderma has a dimitic hyphal structure, thick double-walled brown spores, and causes white rot on trees.

Ganoderma applanatum is related to Ganoderma lucidum, but G. lucidum has a shiny pileus surface.

G. applanatum is located in wooded areas on hardwoods and conifers. It is typically found on the base and up to the middle of the tree.

Ganoderma brownii is found in California. It is very similar to G. applanatum, differing in only a few spore characteristics and geography.

Some fungi are edible and delicious. On the other hand, others are poisonous and toxic. While G. applanatum is probably not poisonous or toxic, it cannot really be considered edible due to the hyphae being too thick to consume.

The major function for G. applanatum is its ability to be used as a canvas. I am sure that it is not as often used to sketch on as it once was, but since it’s spore surface is easy to scratch off, drawings or writings can be created on it. Since this can occur, this fungus is called the artist’s conk. 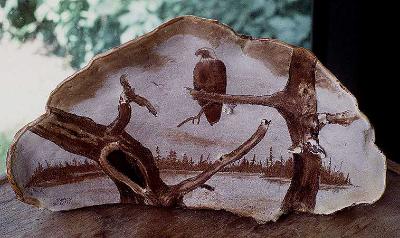 Its common name is the artist’s conk because of the pictures one can draw when the white pore surface is scratched to reveal a brown color.