Richard: The one in your photo has red isidia (the granules scattered over the surface), so it looks like normal H. rubrocinctum to me. That’s the only species north of southern FL so far as I know. See the paper I cited in the notes for Herpothallon. That genus was reinstated in 2009. There may be debate on the subject, though. I’m just following the lead of lichenologists in eastern North America.

Alan: I don’t doubt that this thing is common there. And it may still be H. rubrocinctum. Next time you’re in the area check the isidia. See if the color is variable across the population. Maybe this is just acceptable variation in those parts(?)

The definition of “isidia” is itself problematic for this group. Isidia strictly speaking is an outgrowth of the medulla that pushes up through the cortex but the cortex remains intact and covers the outgrowth completely. Since Cryptothecia & Herpothallon don’t really have a compact cortex, how can they have isidia? Call the granules soredia if that feels better. Regardless, they are asexual propagules, fluffy and roughly globose, easily detached, containing both fungal hyphae and green algae (Trentepohlia I believe).

I found this in a tropical forest, very different form the cloud forest habitat where I usually see this species. I thought it was super common so I didn’t collect it, but I will get a sample when I go back in a few weeks.

why is the name deprecated?
according to index fungorum, that is the current name. 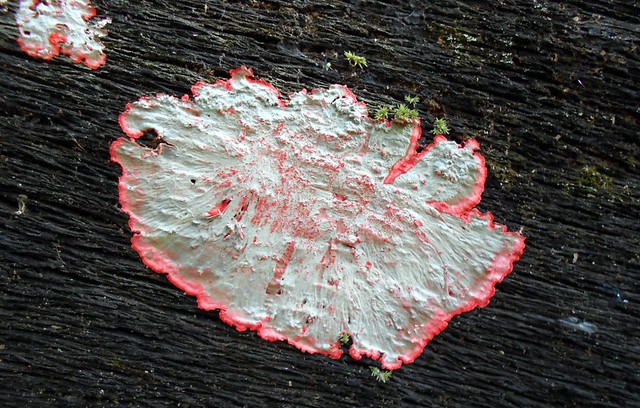 The red pigment rules out Cryptothecia (C. miniata is the only species in that genus with red pigments and it looks very different). But H. rubrocinctum has red isidia, while this has gray isidia. Only the prothallus is red. I could be wrong, but I suspect this is a different species, one not known north of Mexico.