The website is experiencing performance problems. Please
Don’t click the same link while waiting for a page to load..
Avoid Image searches. Instead, search for Observations, then step through them.
Follow the instructions in MO Images for Machine Learning to use images for machine learning.

Notes:
Fungus spider (possible Beauveria sp. or Sugar Icing Fungus)
A spider caught by fungus. After a little research it would appear that this is likely to be a highly specific fungus, which only attacks the one species of spider – and it may be as specific as a species of huntsman (which this is). This is possible a species of Beauveria fungus which is similar to Metarhizium anisopliae. This is used to, among other things, attack the Australian plague locust. It seems likely that the spider gets infected by the fungus which then takes 10-14 days to kill it. It then continues to grow (like this) and will presumably produce some fruiting bodies. These may not be very prominent as a large mushroom growing out of a spider would probably have been noted by now.

Thanks for that Danny. There is very little information on this type of fungi, but I imagine the lifecycle would be very interesting, if a little macabre from the spiders point of view. I hope to find some more some time.

I definitely see the resemblance here: 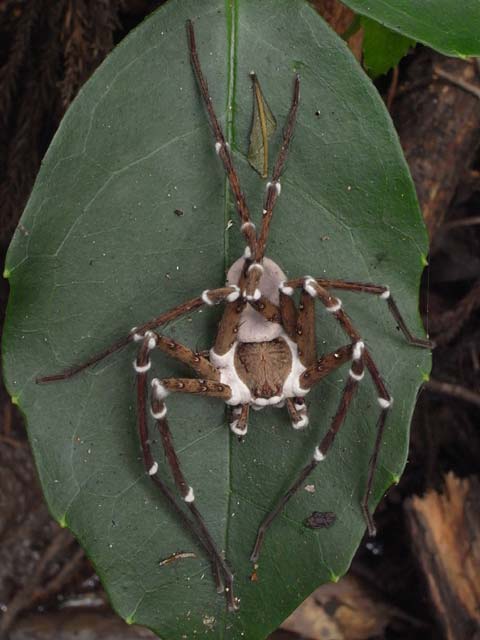 what is your background with entomopathogens? you seem to know a thing or two.

I’ve kept a back-burner eye on this for the past two years. Some developments over at Observation 22259 have brought me back for a fresh look. You didn’t happen to save this, did you? I think there may be other genus candidates outside of Beauveria, but microscopy would be required.

Thanks for that Myxomop. I must admit, I have never seen a mushroom growing out of a spider (yet).

There are many a bug that succumb to a similar, fuzzy, white fungal demise. I’ve only known them to be called Beauveria bassianna up until poking around at Index Fungorum and discovering that Beauveria consists of somewhere around 40 distinct taxa. The mycologists from whom I first learned of Beauveria explained that these fuzzy white forms are all asexual expressions of individual teleomorphs, presumably making Beauveria a genus comprised entirely of anamorphs. The listings at Index Fungorum seem to corroborate this by indicating which sexual forms each Beauveria entry corresponds to, but then there is the question of assigning the correct species name to each Beauveria stricken specimen, which — if anamorphs follow the same naming rules of thumb as teleomorphs — will be determined according to the identity of the host. Anyone feel equipped to provide some clarity on the subject?