Notes:
Big and firm and bug-less :)

Perhaps it was overlooked, as most collection were of mature fruiting bodies, or perhaps it was dismissed as hypomyces. Of the several field guides I checked, only Coker & Beers (1943) and Baroni (2017) mention “stuffed pores” in auripes; notably, NAB and BENA are mute in this feature; Smith & Thiers don’t list auripes in their book. In particular, Coker & Beers write: “Tubes… conspicuously stuffed when young, appearing as if covered by a yellow membrane…”.
In my experience, the “membrane” is white/whitish to yellowish, perhaps gradually changing from white to yellow as mushrooms mature. Here is a photo from M. Kuo’s website. The white growth on the pores near the stipe is likely the hyphal layer, not hypomyces: 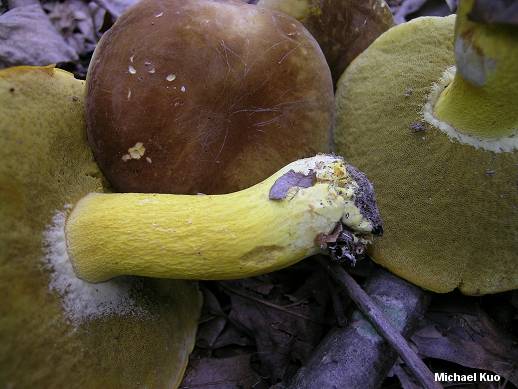 I was grateful for this mushroom’s forthrightness :)

I know you’ve addressed the genetic implications of this taxon’s stuffed pores elsewhere on MO, but I wonder why this crucial diagnostic feature isn’t more widely noted. I don’t have my field guides handy, but it seems like the “stuffed pores” feature isn’t mentioned in the corresponding write ups. It’s omitted at Mushroom Expert too. I wonder why. What do you think?

No confusion here with Retiboletus. :-) You can also appreciate those “stuffed” pores.